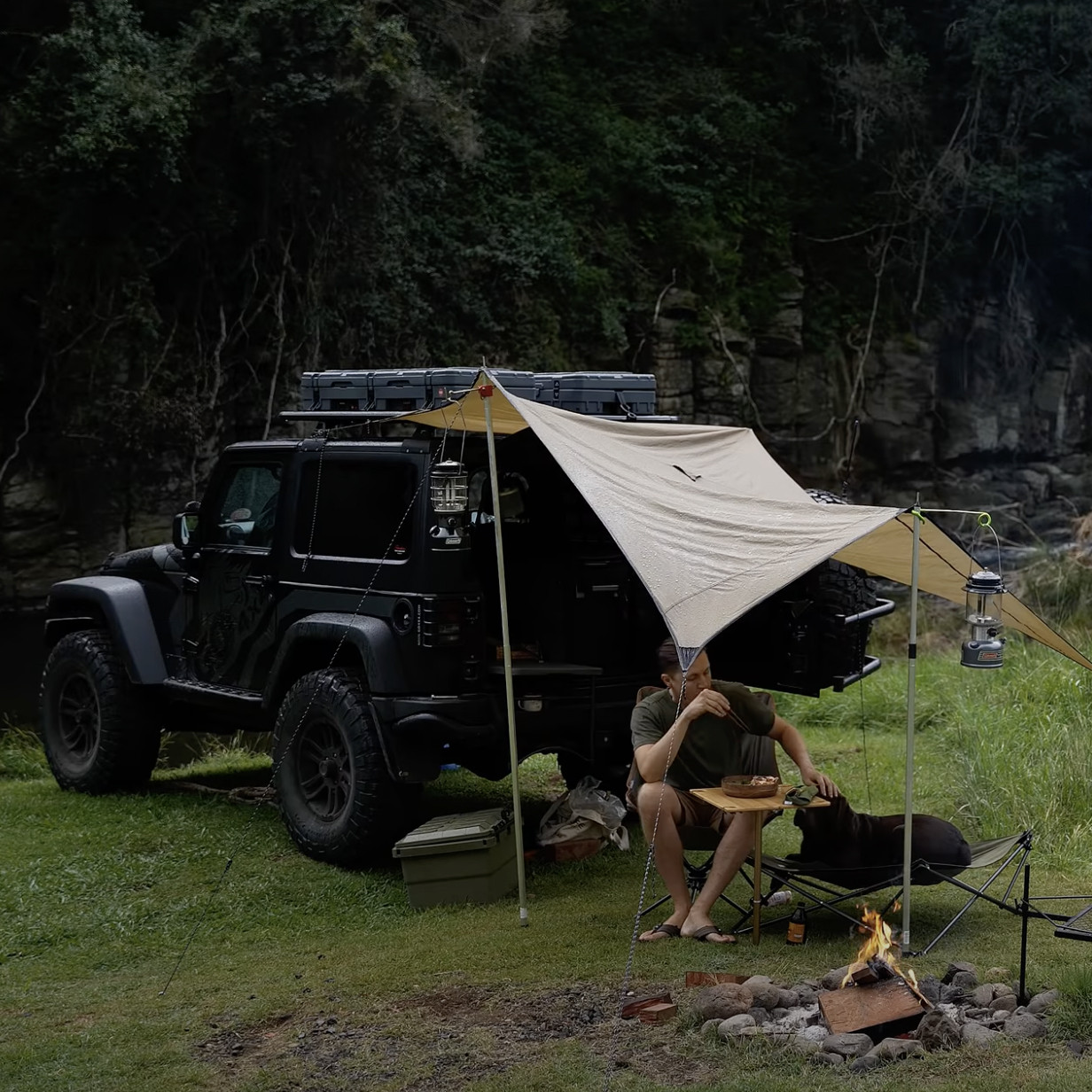 It's one of my guilty pleasures. Whenever I have some downtime, or a break between jobs, I'll open up Youtube and see what it has to serve me. If you're logged into an account, it'll keep track of your viewing preferences and offer you videos based on what you've watched before. I usually find something on the first screen to watch. But if I don't all I need to do is refresh the screen (or click on the YouTube logo) and it'll try again with a series of new suggestions.

On this particular day I noticed a thumbnail that grabbed my attention. Solo camping in the rain. The title didn't sound all too appealing, and the thumbnail wasn't much better, although a beautifully composed and taken shot it was. A man sitting behind his jet black Jeep with his dog loyal by his side taking shelter from the rain.

I kept browsing, but upon glancing back at the view count of this video, my jaw dropped. 5 million views. Is this some sort of new fad that is taking the world by storm? This video was uploaded only 2 months ago. By my maths (and I could be wrong) this 22 minute video has been viewed every 1.5 seconds for the last 89 days. I decided to tap in and look for myself.

It opens on the sounds of camping. Rain hitting a tarp. The ASMR is kicking in. A preview of what's coming up is shown and then we begin. A man is leaving his home. Saturday 7am. A solo trip with Ted it says. We ride along in the back with them as they approach the gate to Canungra Valley Getaway. "A 164 acre cattle property with direct access to the Canungra Creek which flows year-round with various swimming holes." As it says on their website.

We watch on, not a word is spoken, not now or throughout the entire video. The clinking of tent poles and pegs. The unwrapping of tarps. And the gentle undertones of acoustic guitar play as we watch this man setup his campsite with his trusty pay, Ted, watching on. We watch him start a fire, sit back and relax with a few craft beers, cook a gourmet lunch of salmon and do a few repairs on some well worn camping equipment.

I'm interested to see he doesn't opt for a chainsaw to cut his firewood and is using a handsaw. Something tells me he is in no hurry at all and this is his way to maintain the serenity of this beautiful spot by the creek he has found himself in.

The entire video is shot so well, you'd expect it to have a film crew behind it, with multiple angles shots, lighting and sound and perhaps even a screen writer and continuity supervisor. But no. This is solo camping and this guy has taken the time to carefully prop up cameras, record the ambient audio, and edit a video that is something that I just couldn't turn off. It has no story, no plot, just a guy and his dog camping by a river. Yet I couldn't look away. Me and 5 million others (at time of writing). It has had an effect on me and has made me wonder if this is something I'd enjoy doing. Solo camping. It's a thing.

Take a look for yourself and see if it has the same effect on you.

I contacted Eugen and asked how he's handling becoming a viral worldwide hit.

That camping spot is a real beaut. How did you learn about it and how much camping have you done in places like this?

I found this place on Hipcamp, which is basically "AirBNB" of camping. I have been to a couple of campsites booked through this site. I simply started browsing through all the camp spots in a certain radius of Brisbane for my next trip (It was my second Solo Trip overall). I discovered the area called Sarabah, which is truly a beautiful, magical place.

I used to do hobby photography a long time ago, but videography was new to me and started with YouTube. I never did either professionally.

Initially I have been doing different styles of content. Offroading and short camping videos following a rhythm of chosen music. I have gotten a little tired of it, since it felt more and more like work and not a hobby anymore. I had to do off roading and run around filming at the same time, it is very draining and takes the fun out of it. At the same time I could not focus on the quality of the content. Once I skipped uploading a video, I skipped more and suddenly I just lost it. It resulted in around a 4 years break.
I returned last year (2020) around August and started trialing different types of content until we started the series "Sounds of Camping".

Your passion is obviously 4x4 and camping. What else do you love?

Well, Photography and Videography is what I love. This is why I think I have found the content I enjoy to create combining both of my favourite hobbies.

When you were making this video did you have an idea in mind how you were going to edit and did you think it would be such a hit?

Mostly I just go with the flow. I don't have a script or story book. I might plan the start of the video, how to film departure, but the rest is simply about capturing my camping activities and surroundings.

I have a marketing background, I did my research before starting the "Sounds of Camping" series. So partially this is what I was aiming for. However it still feels unreal to me that my vision actually eventuated. I am forever grateful for this.

Why do you think this particular video has been such a hit?

YouTube loves videos which hook people and make them stay on their platform. This video did exactly this plus people continued watching other videos from our series, which is also a big plus for YouTube as well. That's the technical reason behind it. On top of that I was truly fascinated by this place in Sarabah and I think it translated into the video. It is genuine. The mood, the feel, the picture colors, the sounds, all real. I was very happy to be able to share this experience as it is with the world. It is sometimes hard to capture the full extent of beauty through a lens.

Within 2 month we made a giant leap with our channel. It all happened very quickly. We are still a little overexcited. We will take a bit of time to plan the future of the channel as a lot of opportunities opened up to us. One thing I can tell is that the "Sounds of Camping" series will go on for a very long time.